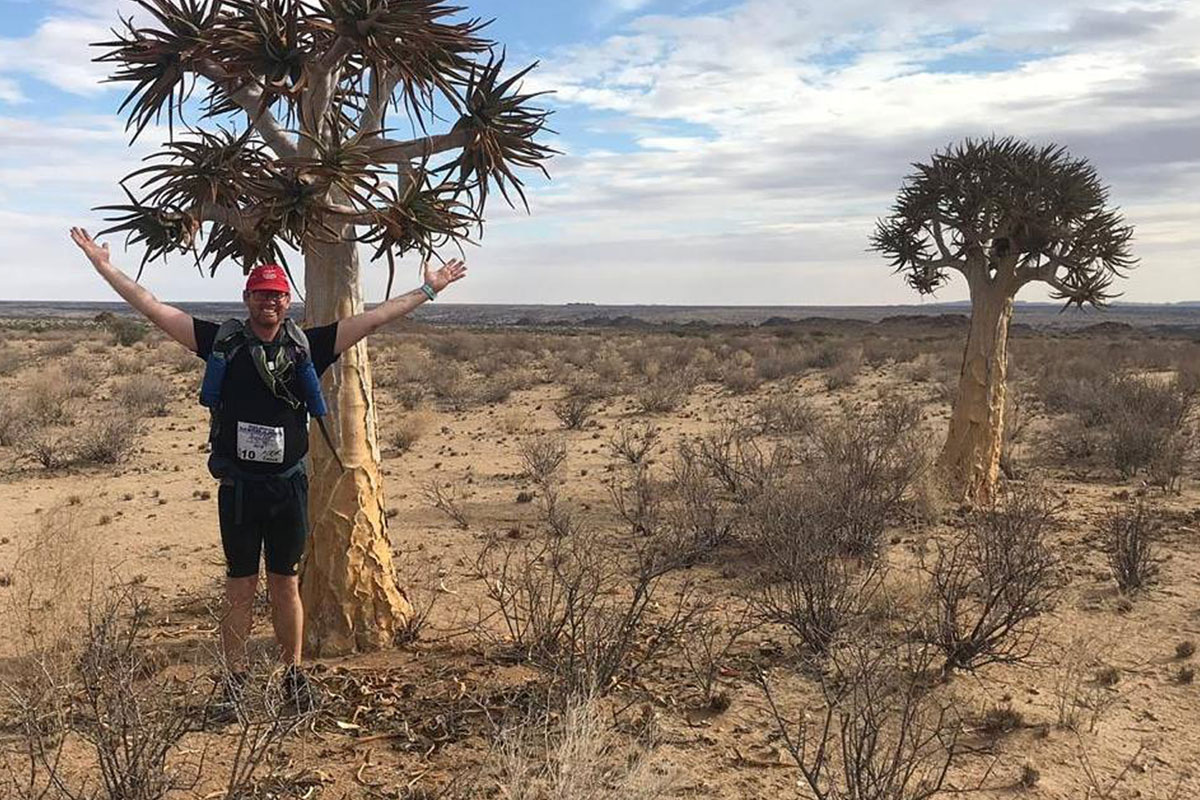 7 Days in the Desert: Proof You Can Rewire Your Brain for Success

250km, the unforgiving desert and nothing but a backpack. Here’s how Dr Oosthuizen completed one of the world’s toughest races on mental preparation alone – and how to apply it in your business today

Everyone said he was crazy. 7 Days, 250km through some of the harshest desert terrains. Completely self-sufficient, with nothing but his backpack on. All for proof that you can rewire your brain for success in even the most impossible-seeming goal.

Did you know LifeXchange’s Dr Cobus Oosthuizen completed one of the toughest extreme races in the world on nothing but mental preparation (almost no physical training)?

Not once, but three times. And not just himself: he was going to take a completely unfit person and also turn him into the first Xhosa man to ever complete this race. To prove once and for all that the principles of neuroplasticity and neuromanagement we teach businesses at LifeXchange Solutions actually work. The ultimate proof that you can rewire your brain for success – in business, at home, in your community.

(Listen: learn some key concepts on how to rewire your brain for success with a series of podcasts created specifically during Dr Cobus’ training for the KAEM. Discover the Energise Your Life podcasts.)

“They said I was crazy,” Dr Cobus recalls. “No one would sponsor my race, my brother started taking bets on which day I’d pull out, and an athletic sports scientist friend begged me not to go through with it – she was convinced I had a death wish, lost all sense of self-preservation.”

THE IMPOSSIBLE GOAL: COMPLETE THE KAEM

And it’s not just that this race, the Kalahari Augrabies Extreme Marathon (KAEM), is one of toughest races in the world: A multi-day 250km entirely self-sufficient foot race known as the “Big Daddy” of extreme marathons around the world, one that only the absolute toughest extreme runners in the world have ever completed.

You know, this kind of race:

WATCH: ONE OF THE TOUGHEST RACES IN THE WORLD

No, they called him crazy because Dr Cobus had never run a marathon in his life.

“I’m not a runner, never have been,” he says. “Sure I surf and scuba dive, but not running. I’d much rather sit on the couch, eat chips and watch someone else do it.”

And he was not only going to attempt it. He was going to do the race with almost no physical preparation. “They say these things are 90% mental, I think it’s more like 99%, that’s why I didn’t really practise running – in fact I collapsed after just 13km the first time I tried.

“No, I was going to sit on that couch I love so much and rewire my brain to believe I can do it.”

THE WHY AND HOW IT ALL STARTED

Dr Cobus Oosthuizen is a PhD in Mentoring & Human Development, and for over 13 years he’s studied the brain and how it affects human behaviour. He’s built an accredited NGO that teaches individuals self-development skills while doing amazing work among the most “at-risk” people in the communities of the Cape Flats – more on that at LifeXchange Community.

More recently, he headed up the team that developed the neuromanagement and strenghts-based programmes that empower businesses with the latest neuroscience insights for awesome growth through LifeXchange’s business solutions.

And, simply put, rewiring his brain to complete this extreme desert race was how he set out to prove that the science and principles behind everything LifeXchange does, really works.

PROOF YOU CAN REWIRE YOUR BRAIN FOR SUCCESS

“I contacted the KAEM organisers, and they said that they only take in 100 of the top extreme athletes in the world per race, and only about 70% of them ever make it all the way.

“That kind of extreme and entirely self-sufficient desert race seemed like a pretty decent ‘impossible’ goal for someone who’d never run a race before, so I took on the challenge and ran it in 2011.”

And then he did it again in 2015. And again in 2018. Here’s the ultimate proof that you can rewire your brain for success in even the most impossible-seeming challenges:

The principles of neuroscience say that your thoughts are messages sent from neuron to neuron, and those thoughts accumulate to become your beliefs about yourself and the things and people around you. Established patterns of thought form neural pathways, which become set beliefs, almost automating your thoughts and actions around a specific topic.

For example: ‘I’ve never run an ultra-marathon, therefore I can’t run this one’. Or ‘I’m not a runner, so I’ll never be able to finish a race like this’. Those core beliefs become your seemingly inescapable reality. Unless you know how to rewire your brain.

The principle of neuroplasticity, first described by Polish neuroscientist Jerzy Konorski in 1948 to further the work on mental conditioning started by Russian psychologist Ivan Pavlov, says that neural pathways are not fixed. You can change them. In fact, if you do, you unlock what seems like a “superpower” hidden inside your brain.

And that’s why Dr Cobus entered the 2011 KAEM completely physically unprepared and essentially naive. “One of the greatest lessons I learned in life is that if you can create a clear vision of what you want to achieve in brain, you don’t have to worry about how you’re going to do it, your brain subconsciously figures all that out for you,” Dr Cobus remembers the first time he ran the KAEM.

So when it turned out he had packed his backpack all wrong, on top of being completely physically unprepared, Dr Cobus wasn’t daunted. He was going to be the best mentally prepared. By rewiring his brain to fully believe that he was in fact a worthy athlete, tough and resilient, he not only finished the KAEM 2011 but finished it as one of the racers who’d suffered the least injury and heatstroke.

“I was unprepared, some would say even stupid. But I did it and what an experience it was.”

And the same methods and principles for rewiring your brain are available for your business, your self and your teams through LifeXchange’s neuromanagement workshops and organisational development.

“After I completed it the first time, a lot of people said sure I can do it, because I’m a trained professional in the field of human behaviour,” says Dr Cobus. “But could I take someone else who’s completely unprepared and use neuroscience to get them to finish this same race? Challenge excepted!”

“I set out to find the most physically and culturally unlikely person to run the KAEM, and that’s why in 2015 I took on Mr Lumko Velapi.”

At the time, Lumko was physically unfit. He’d also never run a race and wasn’t built like a runner at all. He was a heavy smoker who had an admittedly unhealthy lifestyle. And, importantly, he had absolutely no desire to run an extreme marathon. Culturally, it didn’t make any sense for him either: Lumko is Xhosa – and before him, no Xhosa person has ever run the KAEM.

“I trained Lumko in the mental preparation only. We didn’t run together, I didn’t help him prepare for the race in any physical way – I even stood by and watched him pack all the wrong things in his backpack too.”

“And it was very tough. There were times when, in my head, I became convinced that I’d made a mistake, that Lumko would never make it. And that it was all my fault. I started composing my apologies to him for letting him down and dragging him into all of this in the first place.”

“But then, it turns out, the stuff we’d learned together is pretty powerful. And Lumko surprised even me.”

In 2015, with the mental preparation from Dr Cobus, Lumko Velapi became the first Xhosa person ever to complete the KAEM.

It’s pretty powerful stuff. And those same principles are available for you, your business and leadership through LifeXchange’s mentoring training and agile excellence management training.

RACE THREE: HOW TO REWIRE YOUR BRAIN FOR SUCESS

But Dr Cobus was not done with doing the seemingly impossible just yet. In 2018, he completed the KAEM yet again. On his own again this time, and documenting all his preparation and experiences in a series of podcasts called Energise Your Life. (Quickly find all the podcasts here.)

USE THESE TECHNIQUES FOR YOUR BUSINESS

All of the advanced methods and tools that Dr Cobus used to rewire his brain for success in running one of the toughest races in the world (plus a few nifty new ones) are available for HR professionals, teams and business owners to employ in your own business today. Discover LifeXchange’s powerful and custom-made business solutions.

Why are some people more resilient than others? And how can we develop that skill among all our people? Discover resilience theory.

Discover the groundbreaking science of our neuromanagement workshops and advanced management training.

And learn to model high-performance behaviour in your company with mentoring training and how to sustain business growth with strengths based development and organisational development.

And get the best out of all our workshops with a 90-day take-home book with even more info an exercises to explore: Order your own copy of our new Growth Journal.

NEW: Proof of the power of neuroscience. Dr Cobus is once again attempting the impossible: See him ride first-time the backwards brain bike.

NEW: Check out the downright freaky science behind employee motivation.

Understand how people think in business with our look at Erikson’s Theory on Human Development.

You might also like to discover the value of resilient teams in your business with our look at the Circle of Courage.